The flight took about 9 hours, and I didn’t really feel that I was in the UK, until an employee stamped my passport.  That’s when I thought to myself, “I’m in the UK!  I totally made it!!!”  About 20 feet away from me, I saw a band of Olympians checking into the airport as well.  I wanted to take a picture of them, but the airport staff at Heathrow looked a bit annoyed at my gaze.

At any rate, after landing into Heathrow’s airport, I had to check-in again to grab a connecting flight to Glasgow.  It took about an hour to get into Glasgow via flight.  Once I landed into Glasgow, as expected, it was raining.   I then sat at the baggage claim, waiting for my suitcase.  A Scotsman sat next to me, and I asked him if a taxi would be expensive.  He replied, “It would be very expensive to get a taxi from the airport.  You’re better off asking one of the staff here to have him get you a local taxi to pick you up here than using the airport’s taxi or you can take the bus.  I’d drop you off at the hostel, but my car isn’t here.”  I was surprised by his generosity. It didn’t stop there.  There was a woman in front of me, holding her baby while she tried to fold the baby carriage.  The man who sat next to me asked her, “Can I be of any assistance to you?”   That’s when I noticed that people in Scotland were genuinely nice people.  I started to feel less apprehensive about traveling alone. 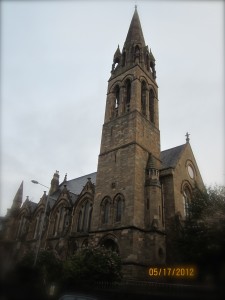 I waited for my baggage for about 25 minutes and one of the men on my flight told me that I was in the wrong baggage claim and he redirected me to the right one.  Luckily, he helped me out; otherwise, I’d be sitting there for another hour waiting for my suitcase!  After getting my baggage, I approached a staff from the airport for assistance.  I held my Moleskin book, showing him the address of my hostel while shaking out of fear as I asked him for assistance.  I couldn’t even hold my book in an assertive manner.  I was just scared and nervous again about traveling alone.  He was soooo nice and said, “Hold on, love.  Let me get you a map.”  15 minutes later, he came back to me and drew a pen mark and showed me where to go.  (I have to say, I am a terrible traveler.  I didn’t have a smart phone nor did I Google any place where I went; thus, I heavily relied on getting my way around by asking people for help).  I then hopped onto the bus, which costed 5 pounds one way, and arrived in Glasgow’s West End.

Now, I like to think that I’m a light packer, but lugging a suitcase up the cobbled steps and hill was really hard!!! At one point, I wanted to kick my suitcase down the curb and just be free from it.  The weather was cold as expected. However, when wearing thermos underneath my slacks, I quickly got hot and started to sweat.  I think it took me approximately 30 minutes or more to find my hostel.  Once I entered the terrace, I noticed a pretty park that was right next to my hostel.

After speaking with about a handful of people from Glasgow, I no longer felt worried.  The locals continued to be very sweet and genuinely helpful.  Even when I asked for assistance from a staff at a 24-hour shop, a gal looked at her map on her phone for me.  I don’t think people here in California would do that for me!! I was glad I was in Scotland and I could only hope for the adventures that would entail after this day.

I settled into my hostel, took a shower and emailed people back home.  I then walked down the corridor and saw a Scottish man in glasses, roughly in his mid-forties, bowing to a Japanese woman in her mid-twenties.  He then peered over her shoulder, his eyes perked up, and he greeted me.  I guess this dude loves Asians!   He started to greet me in Chinese, and I said I was Vietnamese.  That’s an odd thing, too, by the way, when someone thinks I’m a different race from what I actually am, and when I tell them what I am I can’t tell if they’re disappointed or not.  At any rate, the man’s name was James.  He was hungry and invited me to go spend the evening with him, looking for food.

We walked around Glasgow and took a mini walk close to the hostel.  He showed me Glasgow University, stating that this college was known for its medical program.  He went inside Dram!, which is a pub, first but they stopped serving dinner at 9:00 PM, so we went to an Indian restaurant.  The food turned out to be quite yummy.  I ate vegetarian samosas.  James said he left school right after 16 and started to work at the docks. He’s lived all over the world, including Louisiana, San Diego, Huntington Beach and San Francisco. 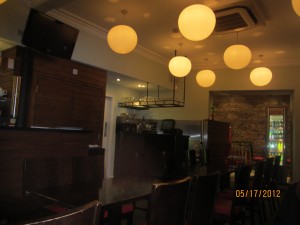 This is the interior of the Indian restaurant.

James was very nice and friendly.  He wanted to ensure that I had a safe trip and he paid for my meal!  After we ate, we walked over to Dram!  He knew I came out here for whisky, so he wanted to hang out  with me some more.  James doesn’t drink whisky  because it’s too expensive, but he drinks beer.  He educated me about the history of Scotland and England.  For example, he said that the Queen of Scots was the rightful queen to control all of the UK, but Queen Elizabeth had her captured and beheaded.  He also stated that some laws in Scotland was better than England.  For example, when you accuse someone in Scotland, you need a witness to have a case.  In England, you don’t need a witness.

James ordered me a Glendfiddich 12 Year for me.  I had my whisky with some water and surprisingly it was rich, buttery and sweet.  I much prefer it with water than having it neat now, though I wonder if it’s the magic of Scottish water! 🙂 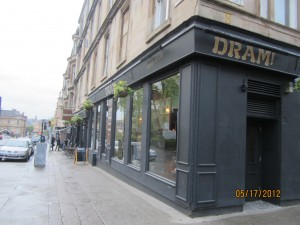 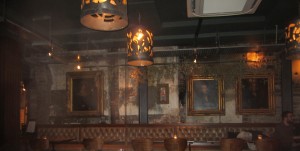 The interior of DRAM! 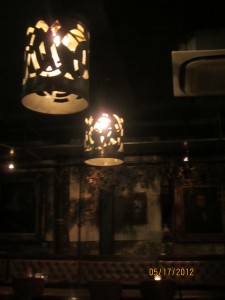 As the evening turned into darkness, I overheard a group of musicians practicing traditional Scottish music to the right of me inside Dram.  I couldn’t really see them because they were tucked behind another room that was near the restroom.  I got closer towards the sound of bagpipes, fiddles and drums and approached one of the musicians, Grant, and I asked him if I could take a picture of him.  Grant plays the Lowland Pipe.  He explained to me that there are over a dozen of different styles of bagpipes.  The ones that the U.S. Americans are used to seeing are Highland Bagpipes, where these bagpipers hold their instrument high.  With the Lowland Bagpipe, you hold it low and tuck your arms close to the sides of your ribs.   There are 3 reeds close to each other.  I can’t remember if he said that with the Lowland Pipes you don’t have to blow on the reeds or not.

I told him about my travels and my quest to search for whiskies.  Grant said he was one of the committee members for Ardbeg, but he had never been to Islay.   He told me about his enthusiasm for peated whisky.  In addition, he stated he never cared for Bowmore, but one of his friends who worked for the distillery scooped some whisky that sat at the base of the barrel and bottled it home.  The drink was completely black and tapered with smoke.  At the time when his friend presented Grant the bottle, there was no label; it was a mystery bottle to Grant. He brought out his bottle and poured the black whisky into Grant’s glass without telling him what it was.  Grant said the aroma was strong and it burned his eyes, but when he took a sip of it he thought it was absolutely amazing.  It turned out that the drink was called the Black Bowmore, which was a special whisky that was left in the barrel for 60 years.  There were some leftover in the barrel and his friend smuggled it!   Since Grant knew I was on a whisky journey, he handed me a flyer of his friend’s liquor store.   He told me to go there and get something if I couldn’t find any bottles in other stores. 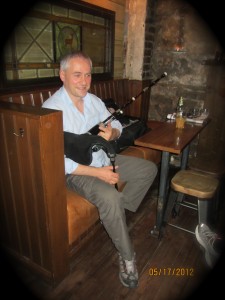